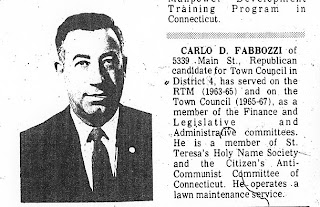 Carlo Dominic Fabbozzi admitted in open court that he molested myself, (Michael Powel), and also next oldest sibling brother Luke Powel while he was treasurer with Stephen (Skipper) Toth at Toth Brothers Transportation. He remarked how he use to bus the handicap kids around. Here is a newspaper article stating to the fact of the civil case in which it took the jury LESS than a hour to award me my victory. To date Mr. Fabbozzi has not given me a dime of my reward while he live's in a high rise in a beautiful area of Bridgeport, CT. U.S.A. and he was a REBULICAN COUNCILMAN for a number of years. TOTH WAS ALSO A REBULICAN.
Suit adds diocese to sex claims
By DANIEL TEPFER
BRIDGEPORT
A former city resident, who last year won a $10.9 million judgment against a former landscaper he claims sexually abused him at St. Theresa's Church in Trumbull more than 30 years ago, sued the Roman Catholic Diocese of Bridgeport Thursday. >In the lawsuit, filed in Superior Court, Michael Powel claims the diocese was negligent in failing to prevent the landscaper, Carlo Fabbozzi, from sexually abusing him. >The suit also claims that Fabbozzi, after abusing Powel, turned him over to the Rev. Joseph Gorecki, who also abused Powel. >"There is no question that he [Fabbozzi] was a diocese employee and I have evidence to support that," said Powel's lawyer, Helen McGonigle. "Fabbozzi was an usher in the church, he was director of CYO [Catholic Youth Organization], he was intimately involved with the parish." >As to the claim of abuse by the priest, McGonigle said Powel had memories of being abused by a priest at St. Theresa's Church, but it was only after doing some research that he realized Gorecki had abused him. >But diocese lawyer James Stapleton said diocese officials have talked to Powel in the past about his claims of abuse and don't find his claim against Gorecki credible. >"He has given two or three different names of priests he thought had molested him and we just don't find him credible, and we are going to contest his claim," Stapleton said. >In 2003 the diocese agreed to pay settlements to six people who claimed to have been abused by Gorecki in the 1960s and '70s. Gorecki died in 1988. >As to Fabbozzi, Stapleton said the diocese maintains he was not an employee of the diocese and therefore it is not responsible for his actions. "He was a gardener who had a lot of clients and the church was one of them," he said. >Last July, following a trial that Fabbozzi, 78, did not attend and was not represented at, a Superior Court jury found in favor of Powel, who now lives in Florida, and awarded him $5 million. A judge later increased the award to $10.9 million. But Fabbozzi claims to be destitute and has not paid Powel a dime. >Powel, 48, who grew up in Bridgeport, claims he was sexually abused by Fabbozzi in the late 1960s and early 1970s at St. Theresa's Parish in Trumbull and at his home. At the time Fabbozzi worked as a landscaper at the church and is alleged to have employed young children, including Powel, whom he allegedly abused. >Fabbozzi, who later worked as a janitor at the church, was fired by the Bridgeport Roman Catholic Diocese in April 2002, after Powel's allegations became public. >The lawsuit claims Fabbozzi introduced the then 12-year-old Powel to Gorecki, who sexually assaulted Powel in the boys' bathroom at St. Theresa's school in the winter of 1971. >Powel also has a pending lawsuit claiming a priest in Missouri abused him, and he says he was abused by the late Skipper Toth, a well-known Easton school bus driver and Boy Scout leader. >Daniel Tepfer, who covers state courts and law enforcement issues, can be reached at 330-6308.
Saturday, May 25, 2002 - 8:37:58 AM MST

Diocese sacks janitor, 76, over sex abuse claimsBy DANIEL TEPFER dtepfer@ctpost.com BRIDGEPORT
The Roman Catholic Diocese of Bridgeport last month fired a janitor at St. Theresa's parish in Trumbull who had been accused of sexually assaulting a boy in the late 1960s and early 1970s.
In response to an inquiry from the Connecticut Post, Diocese spokesman Joseph McAleer acknowledged Friday that Carlo Fabbozzi, who worked as a night janitor and landscaper at the church, was fired after officials received the abuse complaint from a 43-year-old Florida man.
Michael Powel told the Post that Fabbozzi sexually assaulted him on numerous occasions in a garage next to the Trumbull church and at Powel's house.
Reached at his Bridgeport home, Fabbozzi, 76, denied the allegations.
"This guy is fabricating this. I had nothing to do with him, I was busy working all the time, I didn't have time to do what he said I did, he said.
McAleer stressed that the alleged abuse of Powel actually occurred before Fabbozzi worked at St. Theresa's parish. But Fabbozzi has been banned from working again for the diocese, he said.
In addition, McAleer said the diocese has reported Powel's claim to the state Department of Children and Families and it will hold a meeting Wednesday between the Catholic Charities Emergency Response Team and parishioners at the church.
Powel, who said he is dying of brain cancer, decided to go public with his allegation.
"For me it's just a matter of time. I'd like to have some peace before I go, he said. "I wake up every night with a nightmare about what he did to me.
After the diocese fired Fabbozzi based on Powel's April complaint, Powel and his lawyer, Helen McGonigle, of Newtown, met with Bishop William Lori and the diocese's lawyer, Michael Dolan, on May 15 at the Catholic Center.
"I laid it all out to him, Powel said. He said the assaults began when he was 9 and a Boy Scout with a troop based at the church. He said Fabbozzi was a scoutmaster.
During the meeting, Dolan acknowledged that Powel appeared credible, McGonigle said. "The question in his mind was how was the church responsible, she said.
McGonigle said she questions the diocese's timetable as to when Fabbozzi was working at the church.
"They are saying if he was doing this in the late 1960s, he wasn't working for us, but they have given me no evidence of when he was working [there].
McAleer said in 1971, several parishes contracted Fabbozzi to mow their lawns and do general maintenance work. From 1981 to 1986, he was St. Theresa's general maintenance worker.
In 1986 he left to pursue other work. In 1997, he was hired as St. Theresa's night janitor.
"The Diocese of Bridgeport will cooperate fully with authorities in any investigation involving Mr. Fabbozzi, he said.
Daniel Tepfer, who covers state courts and law enforcement issues, can be reached at 330-6308
Posted by godfrey at 11:30 AM